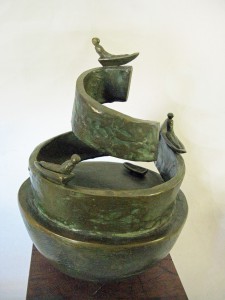 The My Writing Process Blog Tour is spiraling through the blogosphere, offering the inspirational Mother lode on process specifics for those of us between writing groups, classes, or retreats. Pull us up on Twitter using #MyWritingProcess to see multiple answers to four simple questions: What are you working on? How does your work differ from others of its genre? Why do you write what you write? How does your writing process work?

No sooner had I added “blog tour” as part of my to-do list for this fall’s poetry book promotion than appeared Marilyn Bousquin’s invitation to join the tour. I first met Marilyn at She Writes; over the years I enjoyed the warmth and pith of her comments so much that I signed up for her newsletter at Writing Women’s Lives where she mentors women writers. I love her site’s tagline: Your writing. Your story. Your life. Where craft meets consciousness. Marilyn nails the dilemma facing many of us in this quote from her website: when we do sit down to write, we are often tortured by doubt about our writing, which morphs into doubt about our lives, which leads to giving up writing, only to discover that we have to write….Because not writing is the hardest thing going in a writing woman’s life.

Marilyn’s bravery confronting her fears in order to harvest her core stories continues to inspire me as I attempt to quell the anxiety of first book publication. Marilyn’s work appears in Use Your Words, a Writing Guide for Mothers   (by Kate Hopper) and at Literary Mama: Reading for the Maternally Inclined (also read Marilyn’s My Writing Process interview, live last week).

What am I working on? 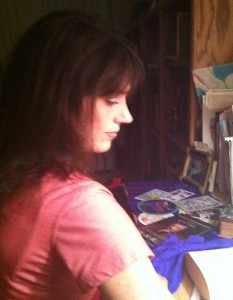 I am working on final edits for my first collection of poems (working title November Butterfly) due to my editor at Saddle Road Press this June. A third of the manuscript ranges the psychic ground iconic women encounter as they attempt to thrive at the intersection of love and motherhood or daughterhood (while facing challenges to the creative feminine modern women still confront). The next third of the manuscript extends that exploration but adds the subject of rape and its aftermath. Guinevere figures as one of many mirrors; her presence in the manuscript (along with Marilyn Monroe, Sylvia, Ophelia, and Joan of Arc) allows for a conversation between past and present. The last third of the manuscript steps out from under the skirts of the “iconics” to reveal part of my own story. The closer we get to November (publication date), the more I’m full of the kinds of self-doubt Marilyn Bousquin addresses in her mentoring work.

I also blog regularly on several sites. Oddly enough, blogging gives me a gentle way to gear up for the exposure of publication (sitting behind a computer is so much easier than standing behind a podium reading for a live audience). To draw on the strength of my women contemporaries, I wrote Revising Guinevere: Ten Writers Transforming Rape, or When Trees Mattered More Than Boys. Each time I approach the subject from a new angle, I feel lighter on all levels, including bodily. It makes sense to me that when we illuminate heavy subjects trapped in obsessive memory, the body, not just the mind, also experiences a release. Thanks to Suzi Banks Baum at Laundry Line Divine, I blogged about this in the guest post, Lost Wings, Hesitations and Outgrowing the Metronome.

It also makes sense to me that when private writing about trauma, however altered or housed in genre (memoir, creative non-fiction, fiction, or even poetry) goes public, for the writer there’s a re-enactment of exposure. But what differs from the trauma and one’s work appearing is the agency one has as storyteller, the distance one is away from the triggering event, the support of loved ones and eventually, one hopes, the joy of a kind readership. I owe the miraculous sensation of renewal directly to an incredible network of women writers I turn to for support. There’s nothing like female to female inquiry —we spur one another to grow in ways we’d never consider alone.

How does my work differ from others of its genre?

Others have described my poetry as lyrical and image driven. The poems anchor the mythical through personal detail, creating alternate but recognizable emotional realities.

Why do I write what I do?

I write in order to thrive, and second, out of the drive to conjure a scene or narrative worthy of haunting another person. I love to observe how and where painters, singers, mystics, and other writers situate themselves in story or scene. I love to try on the skin of the women I write about and resurface with something overlooked. I think of my husband—he loves to dive for lost fishing weights or thumb the guts of abalone for hematite sheened pearls. I also think of the hours we roamed the shore when we lived in Northern California hunting for rare bits of blue sea-glass.

The urge to write from multiple perspectives comes from fertile re-imaginings like Wide Sargasso Sea in which Jean Rhys gives us Bertha’s backstory. Bertha so relatively fractionally inhabits Jane Eyre, though we all remember the monstrous proportion of disaster she causes. In Wide Sargasso Sea, the tables of blame turn. Writing personae poems for me is like that, like divining, a bit like opening to the imaginative resonances set off when giving tarot readings. I love the power of questions, dreams, and psychic or astral communications. In writing personae poems about women of the past, I guess I’m mining their redemptive potential, scavenging for more ways to thrive. A sort of “astral rubbernecking,” if you will: What happened to you? Why? How can I escape the damage of your fate? How did you heal? How do I protect my daughter?

How does my writing process work?

Writing would be as close to the daily monastery as I get. Entirely solitary. I write long-hand at some point every day in my journal and the journal serves as bedrock for everything else. I lift passages directly as seeds for blog posts, essays, and poems. With poetry, drafts need the distance of some living before I can see which poems need their scaffolding removed.

The shock for me as an introvert and a would-be-monastic living in the eye of family-of-five-two-cats-Siberian-Husky-storm is that ordering the manuscript requires other people. At least it has for me. Enter the fabulous extended group of women writers, culled from A Room of Her Own Foundation retreats, She Writes, Story Circle Network and more. We exchange drafts and meet via Skype and facetime; we also snail-mail work to one another. We relentlessly air fears, rejections, and acceptances. Knowing at any hour I can write to any number of friends of the deepest kind takes the edge off the unknown.

I would not be poised where I am today without the love and support of the next three bloggers. Each one of them pulled me out of isolation and into the vibrant hub of on-line connection. Here are the three fabulous women I’m tagging (check their websites on April 14 for their My Writing Process posts): Edith O Nuallain gives me fierce and loyal support with Transformative Blogging concepts; she also connects me with wonderful bloggers overseas and continues to be an inspirational ally. Jessica Powers got ahold of me while I was still nursing babies and later recruited me to be her poetry editor at The Fertile Source; now we blog together at Mother Writer Mentor. Marlene Samuels is a writer I met first by falling in love with a holocaust survivor memoir she edited (turns out it was the story of Marlene’s mother); we met in person through A Room of Her Own Foundation. She is directly responsible for connecting me with Story Circle Network. And finally I owe Marilyn Bousquin thanks for inviting me in the first place; without further ado, here are the bios for my trio (April 26 addition–make that a quartet of bloggers). Ruth Thompson is another beautiful AROHO friend and poet I am also proud to claim as my editor at Saddle Road Press.

Edith O Nuallain lives with her family in a small village on the east coast of Ireland, snuggled between the mountains and the sea, where she reads, writes, and spins dreams into words. Some day she hopes to learn how to spin straw into gold. Her poetry is published in Crannog, an Irish literary journal and her book reviews are published in Calyx: A Journal of Art and Literature by Women as well as online on the Story Circle Network Book Review website. Read her My Writing Process post on April 14 at In A Room of My Own. 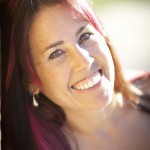 J.L. Powers is the award-winning author of 3 novels for young adults, The Confessional, This Thing Called the Future, and Amina. She is also the editor of two collections of essays for adults, Labor Pains and Birth Stories: Essays on Pregnancy, Childbirth, and Becoming a Parent and That Mad Game: Growing Up in a Warzone. Her first picture book, Colors of the Wind: The story of blind artist and champion runner George Mendoza, is forthcoming in September 2014. She teaches creative writing, literature, and composition at Skyline College in San Bruno, California. You can visit her online and read her My Writing Process post on April 14th at www.jlpowers.net.

Marlene Samuels is a writer, independent research sociologist, and instructor. She earned her Ph.D. and 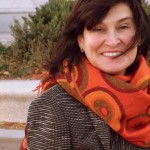 Her sociological work focuses upon problems in contemporary America, specifically: the changing family structure, adoption’s role in creating families and recently, midlife regrets and decision-making strategies. Besides her research, Marlene writes non-fiction short stories and essays that draw from her background as both an immigrant and the daughter of Holocaust survivors.

Marlene conducts research methods workshops and introduction to memoir classes. She co-authored and edited her mother’s Holocaust memoir, The Seamstress: A Memoir of Survival, (Penguin-Berkley), plus an academic book about career success (University of Michigan Press). Her new book – When Digital Isn’t Real: Fact Finding Offline for Serious Writers, (Create Space 2013) is available in paperback and on Kindle.  Currently, Marlene is completing, When Mr. Hitler Hides Inside My Head: A Memoir In Short Stories. Her essays and short stories have been published widely. 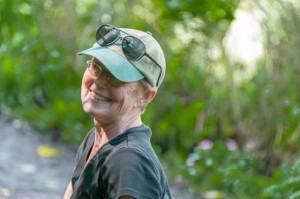 Ruth Thompson is the author of Woman With Crows (2013) and Here Along Cazenovia Creek (2011). Woman with Crows explored a new mythology of the divine feminine, from encounters with “hungry ghosts” to the fool-crone, “dancing what she does not know to dance.” Itwas a finalist for the A Room of Her Own Foundation’s To the Lighthouse Prize, and includes poems that won the New Millennium Writings Award and the Harpur Palate Milton Kessler prize.

Ruth grew up in the San Francisco Bay Area and received a BA from Stanford and a PhD from Indiana University. In a previous life, she was a college dean in Los Angeles. She now lives in Hilo, Hawai’i with writer-anthropologist Don Mitchell. She teaches writing, and meditation, yoga, and writing workshops throughout the US, and blogs about happiness at http://www.ruththompson.net/.  Read Ruth’s My Writing Process Post here.

Artwork at top of post is by Genevieve Barnhart, photo by Robyn Beattie. 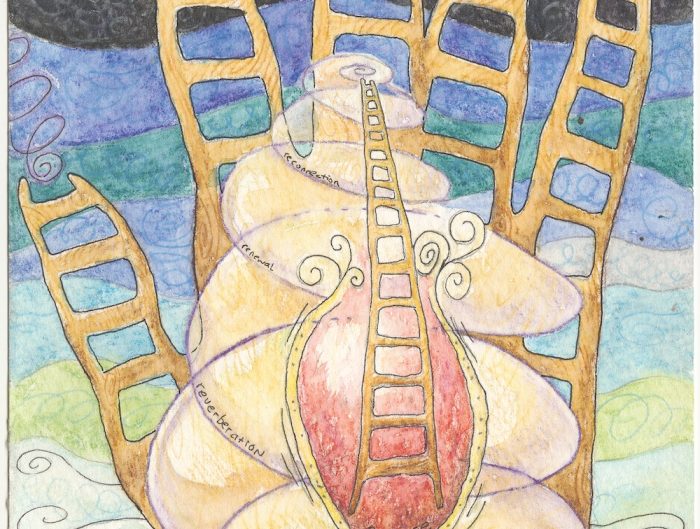 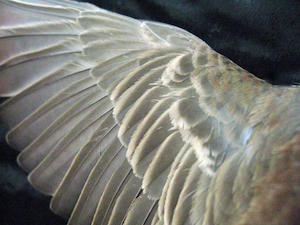 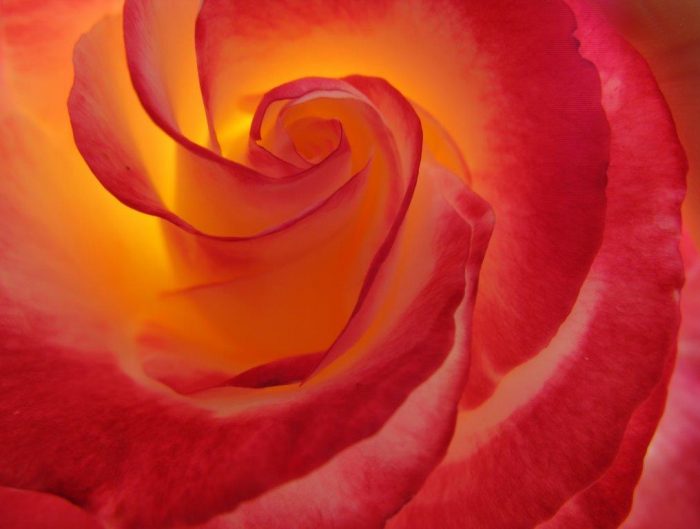