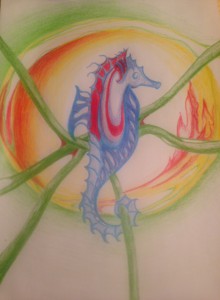 Tracking Wonder #Quest2015, the visioning quest so carefully curated by Jeffrey Davis, moves today, here on January 1 into the living quest. Two final visioning questions from December I’m thinking about today on this first day of the New Year consider, when I combine them, bringing one’s best self to one’s highest form of service.

Visionary Tara Mohr, an enthusiastic and dynamic advocate for women stepping more firmly and vibrantly into their roles as leaders, asks us: How can I be of highest service?

My color meditation response culminated in this Phoenix Seahorse…a natural evolution of phoenixdom from a prior post on Phoenix Eggs I drew in my father’s home. When I shared that post with my poetry movie collaborator Robyn, she responded as she often does with a volley of images. Here’s one of my favorites—which looks to me like the inside of a phoenix egg, say, were you and I to be invited into the interior of a room sized phoenix egg.

I associate blue and red with masculine and feminine strains of motion and being; early in life this manifested as a dream of a blue and red living stem, braided, which one could climb to the stars. I believe my work is bound with bridging and braiding the ways we view the masculine and feminine as it manifests in the separate sexes but also as it manifests internally, as expressed in the writings of teachers of the heart/psyche/dream field such as Helen Luke, Carl Jung, and Marie von Franz.

The night I completed the phoenix seahorse, I had the following dream:

I was in Nepal with a dear friend, observing a lesson on a screen about materialism and how to find your talisman. My friend leaned over to me jokingly and said, “You and I both grew up with nothing, and knew that our talisman was inside of our hands, a part of us.”

I nodded. We turned back to see the next lesson, which showed us the image of a stag guarding a snow laden mountain pass. I understood from the dream the stag was a little frightening, but he was an ally, and a trustworthy friend.

When I woke up, I realized the talisman is actually the hands themselves…for with them I draw, write, color, love the people in my life, and tonight, write to you on this blog. In lovely synchronicity, a fellow quester, and beloved mother writing friend, Suzi Banks Baum of the blog Laundry Line Divine (and divine it is), was at her desk creating some beautiful images of butter-gold hands for a post of her own: The Year of The Permission Slip.

Cheered, bolstered, I turned my colored pencils to the next prompt. Visionary Sally Hogshead’s work hones in on personality traits. Her question, based on her personality assessment work she has carefully charted and written about, asks us:

What is your most valuable personality trait — and how can you bring it forward in your best work in 2015? 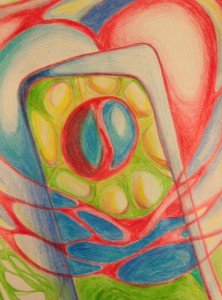 According to her assessment, passion emerged as a primary personality trait, followed by innovation; pairing the two traits renders me a “Catalyst” in Sally’s book (like Suzi, and a number of my fellow quest mates).

My color meditation response, heart door ajar, atilt in the collective rose of our consciousness, sits on my desk as the sun goes down tonight. I see in it the greens of spring, the yin and yang of the masculine and feminine in a porthole seed on the door. I welcome this year of catalyzing the people—writers, artists, mothers, fathers–I meet, wether on book tour, or in the online or in-person classes I’m teaching this year across topic lines from blogging to poetry to tarot.

If not the stag, which animal guards your mountain pass? And though a bit frightening, is actually your ally?

Bio for Tara Mohr, responsible for the prompt on highest service:

Tara Sophia Mohr is an expert on women’s leadership and well-being. She is the author of Playing Big: Find Your Voice, Your Mission, Your Message, published by Penguin in October 2014. She is the creator of the acclaimed Playing Big leadership program for women, which now has more than 1000 graduates from around the world.  Tara writes a popular blog on women’s careers and wellbeing at www.taramohr.com and has been featured on The Today Show and in publications ranging from Huffington Post to Harvard Business Review to MariaShriver.com. Find her on Twitter: @tarasophia

Bio for Sally Hogshead, responsible for the second prompt on one’s most valuable personality trait:

Sally Hogshead is a Hall of Fame speaker, best-selling author, and a leading expert on fascination. Her clients have included Intel, Cisco, Million Dollar Round Table, GE, and Intuit. Her recent book How the World Sees You (#2 NYT, #1 WSJ) applies her research in the science of fascination to leaders and change-makers who want to be more of their best. Find her on Twitter: @sallyhogshead

Related links of interest (other questers responding to the prompts):

Best Self on Liquid Life Solutions by Mark Horn on “subtle touch” and listening past resistance for the hidden power in assessment.

Here’s to the dust-bunnies. Long may they roam by Brenna Layne on the surprisingly lovely just-so strength of the trait of stubbornness (a tale of motherhood and tenacity).

Secure Your Own Oxygen Masks First also by Brenna Layne

Service by Lauren Mclean Ayer on the hero within.

Service by Kate Arms-Roberts on self-care and the beauty of being; includes theological quotes and another image of hands in the artwork of quester Tracee Vetting Wolf.

Why I didn’t shut down, get angry, walk away and not learn a thing by Julie Jordan Scott on sitting tight to learn despite initial resistance to the personality assessment.

Year of the Permission Slip by Suzi Banks Baum with hands imagery collages and a freeing permission slip gallery that will make your heart lighter for the viewing.

Image credits: the color pencil color meditations are by yours truly; the interior of the phoenix egg is a photo by Robyn Beattie. 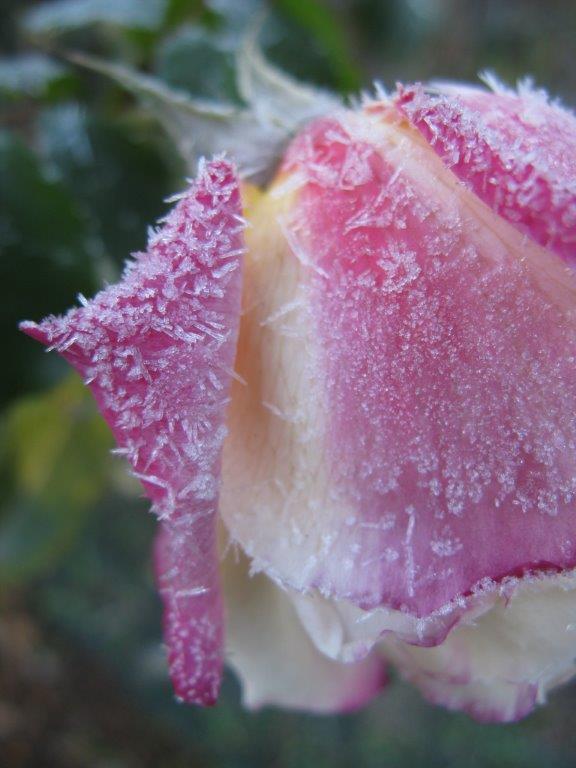 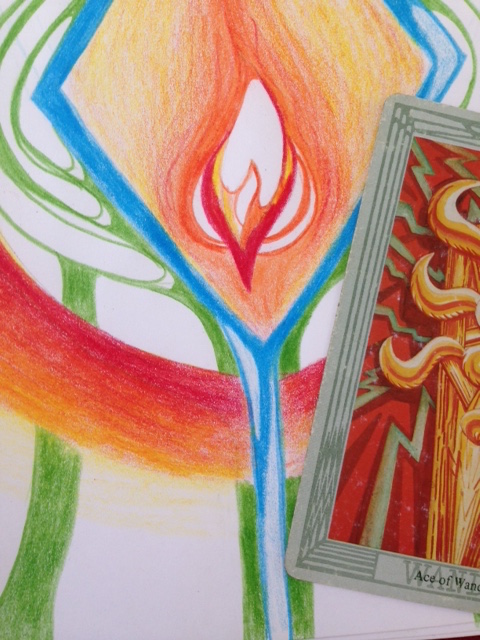 Igniting the Heart Torus: Tarot Visioning with the Ace of Wands on Quest 2016
January 5, 2016 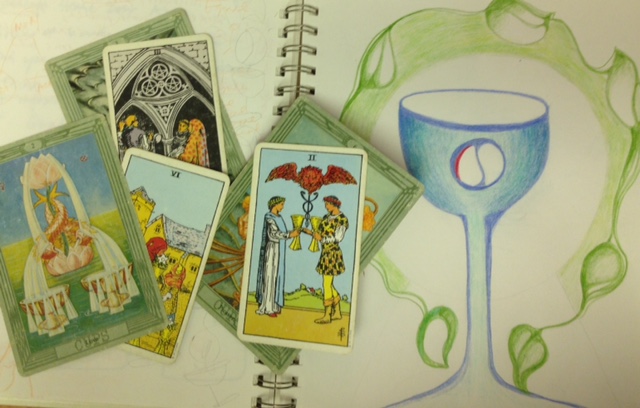