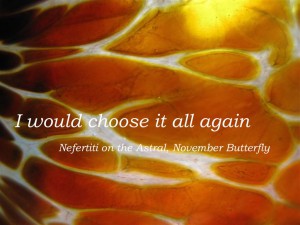 We had some eerie moments when the wire of the mic became somehow attenuated (overheated?) during the recording of a second poem (Nefertiti on the Astral) and in playback we heard a long drawn out garbled voice, as if we were channeling The Queen of Egypt direct. Photo Poem Montage She Dressed in a Hurry Live at The Mom Egg,  Feral Mom, Feral Writer

Today’s prompts were inspired in part by four poems for Nefertiti published in November Butterfly (Saddle Road Press, 2014): Nefertiti Among Us (originally published by Stone Canoe Online), Thutmose Court Sculptor, Kiya, and Nefertiti on the Astral (originally published by Prairie Wolf Press). The poems speak from a number of vantage points including a woman archeologist, the sculptor renowned for making the infamous bust of Nefertiti, the second wife to the pharaoh (Kiya), and Nefertiti herself situated on the astral plane looking back on her incarnation. 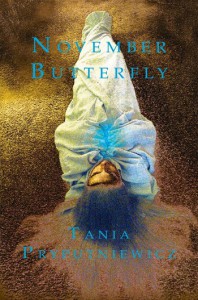 Historical background on Nefertiti and her Pharaoh: Pharaohs of the Sun (National Geographic, by Rick Gore).

A Q & A with author Michelle Moran  on the writing of her novel, Nefertiti: Queen of Egypt, Daughter of Eternity (Three Rivers Press, 2008).

Links to Feral Mom, Feral Writer regarding the 2D3D Visual Poetry Exhibit where She Dressed in a Hurry, Nefertiti Among Us, and Amelia were featured.

Ladder to the Moon: Child vs. Art about the challenge of making it to the 2D3D Visual Poetry Exhibit reception to receive news that the photo montages She Dressed in a Hurrry, Nefertiti Among Us, and Amelia received Juror’s Best of Show award.

The Great Hymn to Aten, History and Archeology Blog of Rene Nieuwenhuizen