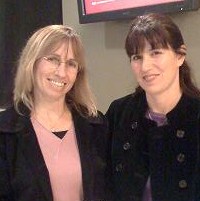 Poet Liz Brennan and I collaborate when we can with prose poetry, thanks to Liz’s gentle invitation and perseverance.

Liz’s blog reminds me of a mobius strip; she’s arrived at an ingenious structure, each week posting a tiny prose poem that begins, Perhaps….Followed by a second prose poem that begins, Maybe… I’ve included the links below to the texts of the poems and the micro-readings Liz posts of us together. Liz would love others to join her collaboration; contact her from her blog if you wish to participate.