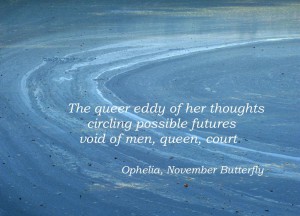 Another image that lived in my home for several years quietly speaking to my subconscious was a painting titled The Rescue of Ophelia (by Christine DeCamp). A massive leaf borders the body of the floating Ophelia as she cradles in her arms an owl, Shakespeare’s last word trumped by DeCamp’s alternate reality. Cross-Pollination: Claudel, DeCamp, and Beattie (Feral Mom, Feral Writer).

Today’s prompts refer in part to the poem Ophelia, originally published with Nefertiti Among Us at Stone Canoe Online and forthcoming in November Butterfly (Saddle Road Press). The poem was inspired by a painting titled The Rescue of Ophelia by Christine DeCamp (pictured below). Poets from Rimbaud to Natasha Tretheway (Bellocq’s Ophelia excerpts at South Writ Large) and Meghan O’Rourke (Ophelia to the Court up at poets.org) have taken on Ophelia. Read the versions linked to above. Then, step into Ophelia’s mind. 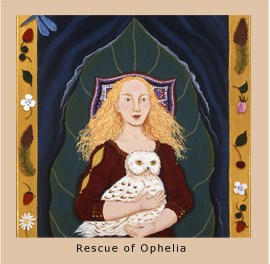 Website for Christine DeCamp; her painting The Rescue of Ophelia joins a series of her paintings she has chosen to accompany with text and publish in the form of Wild Spirit Woman Cards.

To Be or Not To Be: Hamlet as a Choose-Your-Own-Adventure Novel by Maria Popova at Brain Pickings 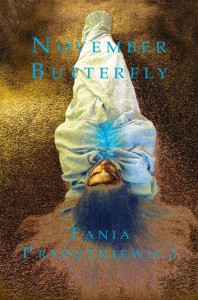 An Interview with Mary Pipher at Spirituality and Practice.com

Rescue of Ophelia and Nefertiti Among Us at Feral Mom, Feral Writer

Nothing New Under The Sun: The Eternal Life of Jeff Buckley at The San Diego Troubadour

This Time Out, Parting is Such Sung Sorrow, Theater Review by Charles Isherwood, New York Times

The Rescue of Ophelia is by Christine DeCamp. Photo at top of post and cover for the poetry collection, November Butterfly, by Robyn Beattie . Cover Design, Don Mitchell, Saddle Road Press