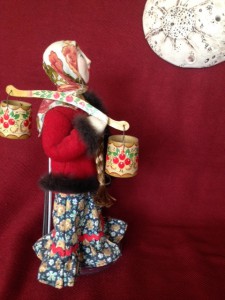 Quest 2016 continues with Srinivas Rao, author of The Art of Being Unmistakable:

What will you do in 2016 to assure you and your best work are unmistakable?

I’m walking with my husband, our middle son Orion, and the Husky. A full moon hangs over the Russian River. Blue mist shrouds the grey gables of the redwood covered hills. Teardrop tips of ripe persimmons hang heavy on leafless boughs, stark and black against the luminescent field of clouds. I breathe in the damp air.

An arbor clotted with overgrown roses blocks the entrance to a cabin long left empty; a plume of woodsmoke roils from a two-story home on the left. Up ahead, We Three Kings plinks out one harpsichord note at a time, piped out of a speaker from the dash of a car on cinder blocks in front of a bungalow. A ten-foot blow-up snowman glows beside the car, listing in the night breeze, his red scarf sticking firm.

My son, giddy with adrenline, runs past. I linger, unafraid; Greensleeves picks up where The Kings leave off. This is my home town, sleepy little river, where no matter how hungry you are you pump up the snowman, string up the xmas lights, and leave your speakers facing the street for anyone walking the midnight dog. 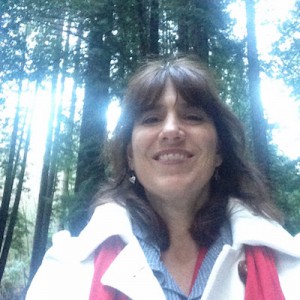 Here’s a photo of me filled with joy in the redwoods. I was inspired to post it by the beaming smile of Srinivas Rao, author of today’s prompt: What will you do in 2016 to assure you and your best work are unmistakable?

The Russian River is one of my heart homes. Thriving unmistakably in my work means thriving in person, my own heart, in my heartlands of choice. I have more than one (Iowa City, Ghost Ranch in New Mexico, and Sea Ranch with my sister writers The Flamingoes to name a few). Do you know your heartlands? On quest we learned to anchor physically to them using horizon work with Quest leader Jeffrey Davis.

I mean that to do umistakable work with others and for others, I will have to stay connected to my own joy, which occurs when I keep up the steady practice of writing and seeing the world through the various art and writing and poetry movie and Tarot reading lenses I habitually plummet for meaning.

Another of my heart homes is the house of my father. I wrote about his home last year on quest (Phoenix Eggs in the House of My Father). On this visit, one of his gifts to me was a night-time dream he had about about a concept called poetry drift which I will write about later. 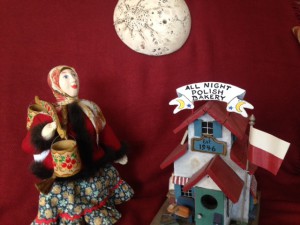 On a blue chair was perched a doll my poetry movie collaborator was getting ready to take to a new restaurant near the mouth of the river called Russia House. Beside it on the chair sat my father’s miniature three-dimensional All Night Polish Bakery. As happens when the three of us are together, I had the urge to play. Here is Baba Yaga, staring at the full moon of Robyn’s making against a red backdrop we staged on the couch.

Doing unmistakable work will involve honoring the slowed pace of the arc of “getting there,” that ineffable elusive “arrival” given the clock of motherhood. And remembering to play where ever I am with those around me.

On the drive home from San Diego, I pulled three cards to answer Srinivas Rao’s prompt. I thought about how one might go about creating unmistakable work, which I took to mean unmistakabley soul imprinted in some way. I chose to focus on creating work that is timeless, work that is heart-centered, and work that is useful (inspired by Chris Brogan’s ideas about usefulness). 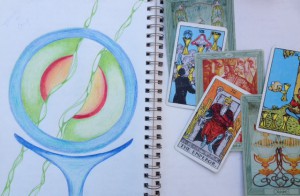 The Tarot decided to play a little trick on me here to give me one of my least favorite cards in the Thoth deck: the seven of cups. Here we see seven sludgy cups posed in mimicry of the tree of life, an image of despondency and the fountain of life mucked with emotion. Titled, debauch, you can see why I was grumpy.

So as we drove our ten hours home, I pulled out the Rider Waite card too—which shows the seven cups of illusory desires. I thought about our lifelong capacity to hunger and fantasize and dream. That is timeless…our dreamer and daydreamer self stays with us throughout our lifetime.

How do we know which cup to reach for? I hope my work helps others withstand the heart’s process of choosing, not staying stuck in delusional indecision nor hiding from the reality of the dreams we keep coveted and hidden in our heart of hearts. The capacity to withstand revealing the heart’s desire and the private process of igniting them is sacred to me. Why would we dream if we weren’t meant to fulfill them?

When I got home, I consulted my Tarot library. Phrases for the Seven of Cups I loved from Alejandro Jodorowsky’s Way of Tarot: The Spiritual Teacher in the Cards with Marianne Costa) include: “actively creating the emotional world” and “emotional fire gestating in darkness and solitude.” These phrases helped me remember that the Seven of Cups is just another depiction of how the heart grows by intimately examining its dreams.

I associate this card with loving power and grounded material stability. Personally, too, when I looked at The Emperor and thought about the important males in my life, I of course thought about my father and the red we draped behind the All-Night Polish Bakery on this Christmas visit. I will always draw on the example of his love and the manifestation of his art-laden home as a reminder of heart-centered work. My heart blooms in such an environment, and wherever I have lived I’ve filled my own walls and cabinets and shelves with reminders of the portal art provides to help us see more deeply.

Key to Creating Work that is Useful: The Four of Cups

Once again, with their sly way of pushing me to grow, the Tarot cards gave me another tricky card. In the Thoth deck we see four cups streaming with gold light, titled Luxury. Which at first glance is a very positive card for celebrating the heart and celebrating the flow of harmonious emotion. I would love for my work to be luxuriously useful to others.

The Rider Waite deck, however, shows a young man with his back to a tree. Three full cups sit in front of him. A fourth cup is being offered. Sometimes the Four of Cups is known as the “grass is greener” card. This reminds me a bit of that Seven of Cups, where cups are everywhere but we find ourselves immobilized, temporarily unable to accept or commit to choosing one. 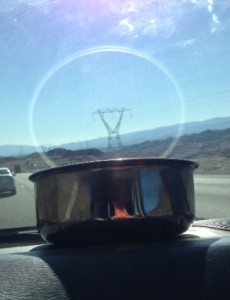 Maybe it is a reminder to those of us habitually used to experiencing difficulty to remember that opening to joy and luxurious light might at first feel unfamiliar and odd, but it is worth it to open to happiness and become accustomed to joy again. Accept the cup!

For fun, here’s a photo I took along the grapevine. With van overstuffed with our family of five’s gear plus Husky, sleeping bags, assorted gifts from the holidays, pillows, and cooler, the dog’s dish had to be stowed on the dashboard. As we drove, I couldn’t help noticing the silver halo ring it cast on the windshield nor could I refrain from snapping photos of what the loop “snared” in its circle. Here’s one of my favorites of a transformer. I love the violet light at the top. Here’s to a transformative, playful 2016 and to all the complicated, fertile, feral territory thriving inside the halo of heart.

Today’s in-process drawing is a version of a mirror. Or the view looking down into the cup, the heart, with path streaming behind.

Srinivas Rao is the host and founder of The Unmistakable Creative podcast where he has conducted over 500 interviews with thought leaders and people from all walks of life. This has given him an incredibly distinctive view into branding, storytelling, and marketing. He’s also written multiple books including the WSJ Best Seller The Art of Being Unmistakable (2013); created, planned, and executed a 60-person conference called The Instigator Experience; and recently signed an offer with Penguin Portfolio to write 2 books. Somewhere along the way his compass led him in the direction of an economics degree from UC-Berkeley and an MBA from Pepperdine University. Extracting unmistakable stories out of people is his superpower. And in his spare time he’s usually chasing waves.

Photos: were taken by Yours Truly. The All Night Polish Bakery and the clay moon were both made by my poetry movie collaborator Robyn Beattie.

A sampling of posts by other Questers responding to Srinivas Rao’s prompt:

On Being Unmistakable by Kate Arms

Essential Questions: Wrestling with Imperfection that Life is by Sara Eisenberg 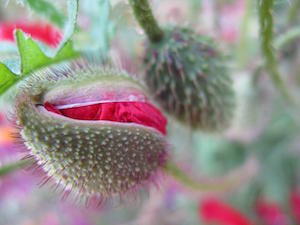 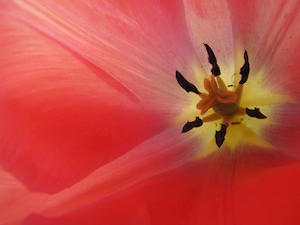 Tarot Tuesday: The Chameleon Heart and the Seven of Cups
March 16, 2016 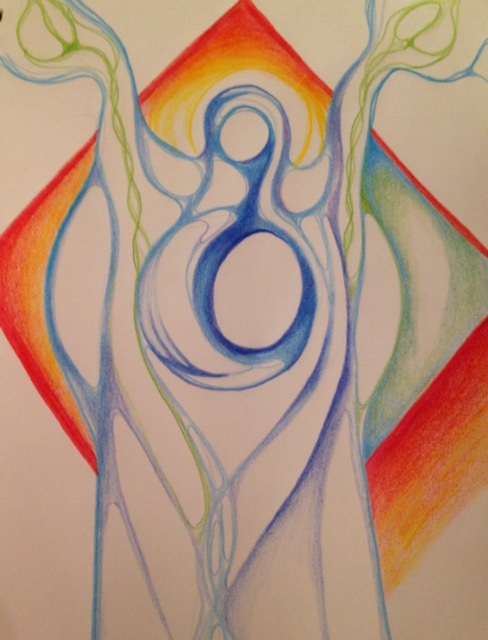