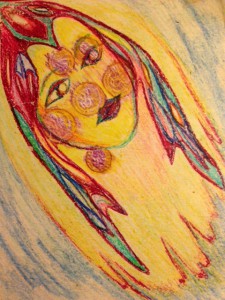 “Of all the writers I know, Joan Swift is surely one of the best at transforming reverses into poems of astonishing beauty and strength. Her particular blend of memory, imagination, feeling, and intellect creates an alchemy that changes the base metal of experience into gold.” Madeline DeFrees, Ploughshares, on The Tiger Iris by Joan Swift (quoted on Swift’s website)

Standing in the shadow of my shadow bag is a girl with coins falling out of her hair.

She lives inside of a burning house, inside the walls, stashed with enough gold to fund a kingdom.

I drew this image based on a December dream I’d had long ago. I sat coloring in a kitchen, listening to friends talk one New Year’s Eve. I’d just graduated from UC Davis and stood poised to put in motion my lifelong dream of leaving for the heartland to study with other poets.

In the night-time dream, firemen were abundantly present; I knew they’d eventually surround the house with their endless hoses and streams of water. I can still haul up the calm, radiant, and vulnerable beauty of the girl in the wall.

The image has been living in a folder with drafts of the next set of poems I’m writing about an Illinois commune I lived on as a child about both the beauty of spiritual reaching and the trespasses of spiritual charisma that lead to crossing lines with the female flock. I flashed on the drawing as I began to consider Tracking Wonder #Quest2015’s prompt from visionary Eric Klein, who asked questers: 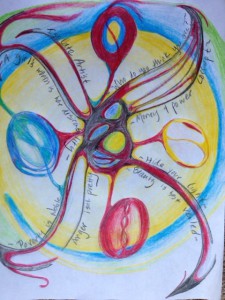 How will you face your shadow bag and stop the stink, so you can bring forth what is best within you in 2015?

This December, 23 years after drawing the girl with coins falling out of her hair, using much the same color pallette, I attempted to draw my shadow bag. Phrases attended the spider knot bottom of the bag, as did phoenix eggs of potential: Anger isn’t pretty, Poverty is noble, Beauty is best veiled, Money and power corrupt, A girl’s worth is her desirability, Isolate Artist, and Who do you think you are…

Enter The Fool and His Satchel

Because I’m also spending time in 2015 with the Tarot’s Major Arcana cards, one a week, starting with the Fool card, I left the shadow bag question to simmer, and worked instead on a Fool Color Meditation I wrote about in my last post, Trusting the Noir Fairytale. I didn’t include any of the Fool’s traditional tools in that first drawing.

But then I began to think about The Fool’s journey. That ability to start fearless, anew. For me that starting anew has occurred with finalizing a cycle of writing about female creativity and agency and personal past trauma while celebrating the beauty still be found in an earthly incarnation (November Butterfly’s poems chronicle that journey). Finishing that project has helped me turn again and trust a universe I cringed from in one form or another for a long time. Could I come at the threshold of 2015 renewed? Like the Fool? 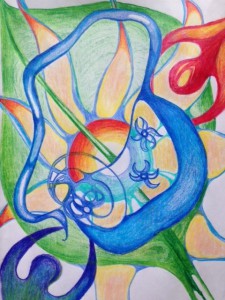 Choosing, like we do before we incarnate, male or female: 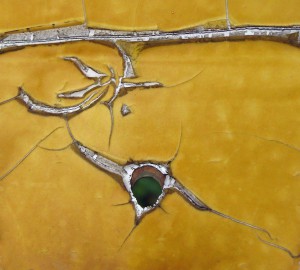 The last line of that second haiku (from this year’s daily Haiku practice) circled me back to the shadow bag concept. While my youngest slept off a fever, I started a second Fool color meditation based on the satchel weighed with stars, like coins. Maybe in the shadow bag (so full of what I judge to be past traumas I can’t seem to shake fast enough) are the gold coins or seeds of the trauma resting hidden in soft sanctuary. Maybe we shouldn’t be cruel to ourselves about our past or how long it takes to get over it. Maybe those very trespasses are the coins we exchange to grow and flourish.

And sleeping, or even very much awake, is the untouched girl, ready for her next adventure.

In synchronous confirmation this morning, as I looked down at the mid-process drawing of blue stars inside the satchel, doubting the work, thinking about starting over with a different image, my poetry movie collaborator Robyn Beattie emailed me an image with a note, “a bright, sunny image for your day…” and there it is, in silver, on a gold backdrop, the Fool’s star, sprung out of the satchel and into a buttercup sky. See her? With arms outstretched?

My work this year on November Butterfly (Saddle Road Press, 2014) book tour teaching Writing Past Fear: Free Your Butterfly workshops, helping others to honor by naming and thus draw strength from mentors, is due in part to my studies at UC Davis. I was lucky enough to encounter the work of poet Joan Swift in Sandra McPherson’s undergraduate Women Poet’s class.

During this time in college I was fighting my way through increasingly confusing and emotionally challenging serial love relationships. Raw and in transition, I found comfort in the way Swift’s poetry in The Dark Path of Our Names (Dragon Gate, 1985) validated the subject of rape as a poet’s viable terrain; her brave and unsentimental multiple perspective poems for a namesake murdered by the same man who raped Swift jarred me awake, gave me a context: Ravine, Coroner, Her Husband, Victim, Beside her Husband (in the courtroom), His Mother (rapist’s), His Sister, Another Witness (the poet, testifying about her own rape), and Detective….even so bravely extending the orbit of her gaze to include Prisoner. 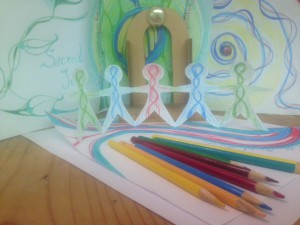 Further, Sandra McPherson urged us young women poets to not fear writing about our secrets (see her essay Secrets: Beginning to Write Them Out published in A Field Guide to Contemporary Poetry and Poetics, Oberlin College Press). For my final exam, McPherson, with generosity and great kindness, allowed me to make a three-dimensional diorama celebrating the work of the women poets we studied. To represent Joan Swift’s work, I cut out a string of paper dolls, representing Joan, the other Joan who died at the hands of the rapist, and other women (universals) who suffered sexual trauma. I did not label the dolls, but I painted them in a spectrum of colors, the lead doll remaining pure white and the rest gradually turning fire, after the final line in the poem, Her Husband, referring to the husband dreaming his murdered wife “still waits” under the tree for him. He’s holding in his hand “a stalk of crimson paintbrush. / Her body is taking the color.”

A friend asked me where I got the idea to pass out strings of paper dolls in the workshops. I only recently realized the connection as I began to work with color again in these meditations on #Quest2015. It is to both Sandra McPherson and Joan Swift I owe the gift of the Mentor Doll seeds, and to Tracking Wonder’s Jeffrey Davis for introducing to us to a beautiful group of visionaries and encouraging us to step out and take creative actions (for me, in part, returning to color meditations). 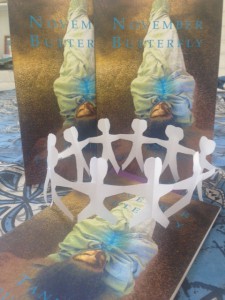 Drawings are by yours truly; photo of the silver star on gold backdrop is by Robyn Beattie. November Butterfly’s cover photo is also by Robyn, cover design by Don Mitchell of Saddle Road Press.

Bio for Eric Klein, responsible for the prompt for questers on the concept of Shadow Bags:

The founder of the Wisdom Heart School and a longtime internationally respected spiritual teacher, Eric Klein has been a pioneering voice in bringing more spirit, meaning, and authenticity into the workplace. He’s worked with over 20,000 leaders from Fortune 500 companies, healthcare, governmental and non-profit organizations as well as mid-size companies. He’s author of the bestselling book Awakening Corporate Soul: Four Paths to Unleash the Power of People at Work, To Do or Not to Do: How Successful Leaders Make Better Decisions, and You are the Leader You’ve Been Waiting For (a 2008 Nautilus Award-winner as a world-changing book in the conscious leadership/business category). His online meditation program The Meditation Habit is used by corporations and individuals globally.  www.wisdomheart.com. You can follow Eric on Twitter: @EricKlein

If you wish to join and #LivetheQuest, here is where you can read the the pledge, by Jeffrey Davis of Tracking Wonder. Read more about Tracking Wonder here.

Joan Swift’s poem Victim, from Dark Path of Our Names

Other questers writing on Shadow Bags:

Diving into Your Shadow Bag, part 2: #Quest2015 by Ginny Lee Taylor at Women of Wonder

Laying Down Fear and Claiming My Artistry: An Apology by Molly Morrissey

Starting Where I am: In the Dark by Suzi Banks Baum at Laundry Line Divine

Saved by Taylor Swift by Vanessa J. Herald at crackled.sparkling.ephemera

Where all the ladders start by Brenna Layne